{This is an activity we did last year that I never got around to posting!} Lesson two in our Flying Creatures book had us making birdfeeders.  The idea is to make two identical birdfeeders filled with different types of seed, then hang them near each other to see which the birds prefer.  We followed the instructions in the book to make simple feeders out of two-litre plastic bottles. 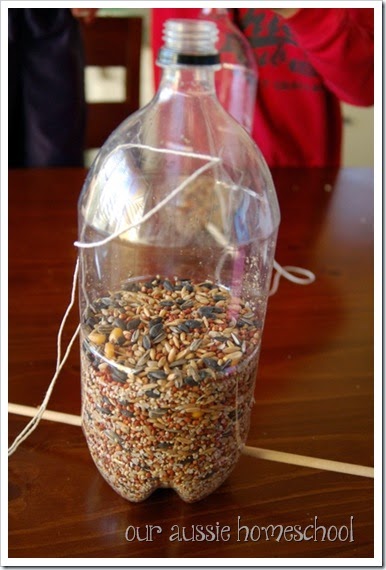 Filling them was the most fun for the kids. Not so fun for me because of the bird seed that went everywhere, but they enjoyed it. 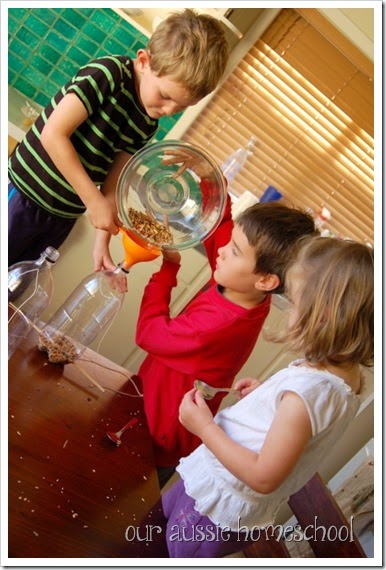 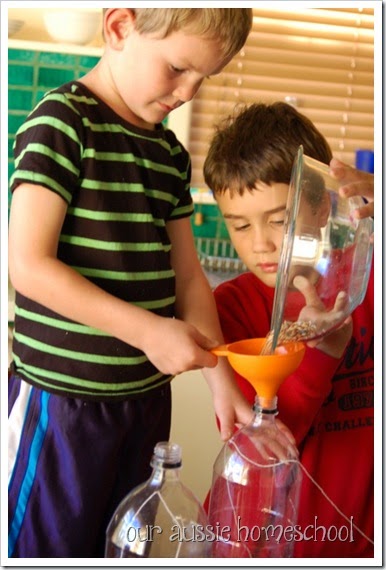 Ladybug was using a spoon and kept tipping it the wrong way so it kept spilling.  I gave her a small measuring cup instead, it worked much better. 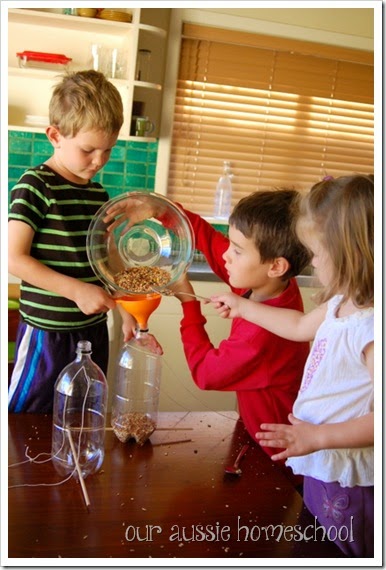 Lots of filling.  There are two holes near the bottom for the birds to eat from.  While we were filling we had to cover them with our hands until the seed was above that line so that it wouldn’t spill. 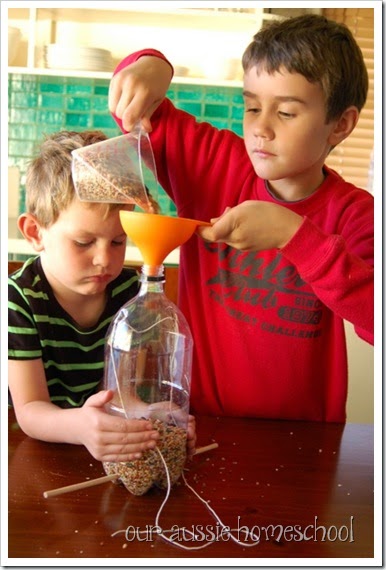 What’s wrong with this picture?  We forgot that we were supposed to have two different types of seed.  Whoops. 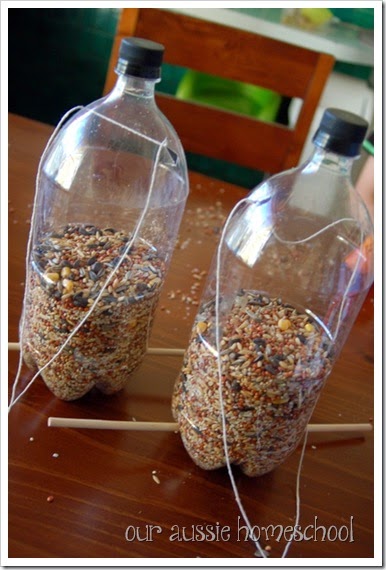 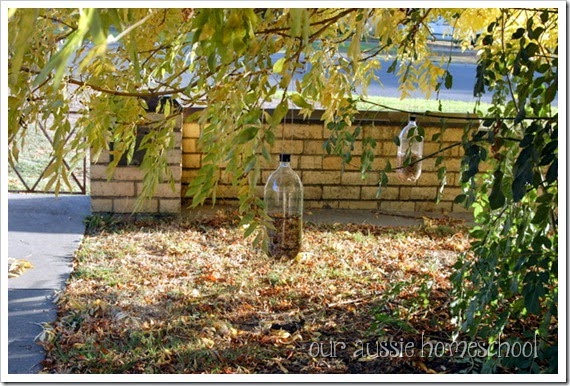 A few days later we remedied the seed situation by replacing one with just sunflower seeds. 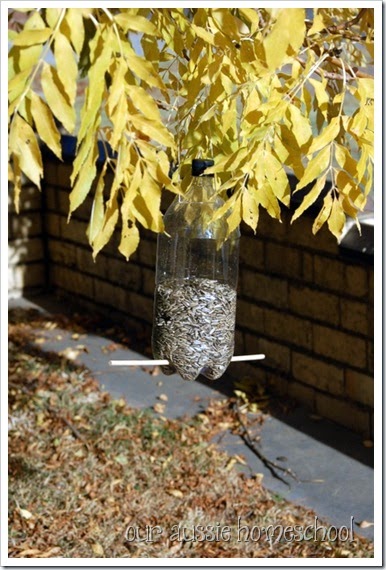 We placed our birdfeeders in this tree because it is the only one we can easily observe from a window.  We left them up for ages and the birds didn’t like them at all!  So we tried again with new feeders in case the birds just didn’t like the feeders. I know it doesn’t look like it from these shots, but we hung them both in the same tree. 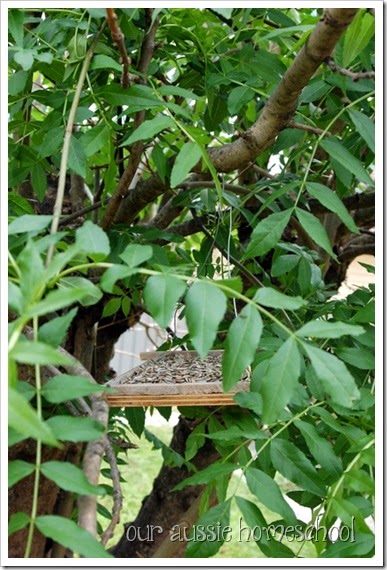 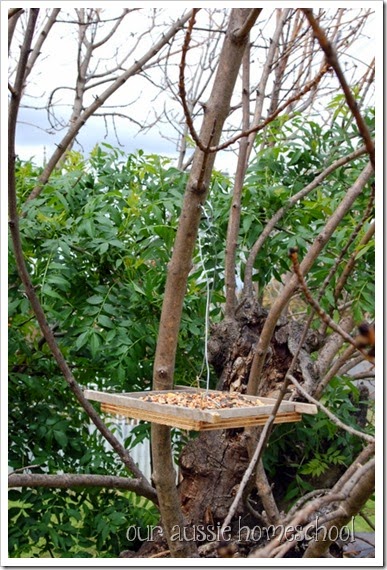 One with mixed seed, one with sunflower seeds. 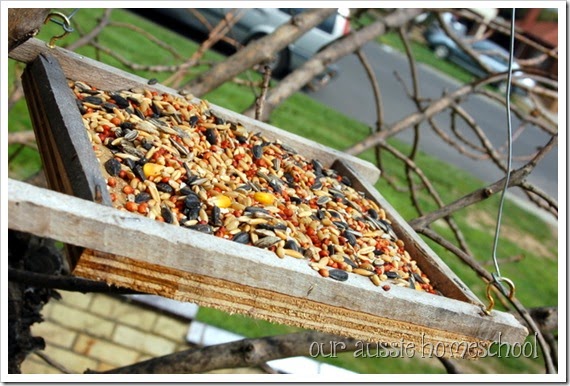 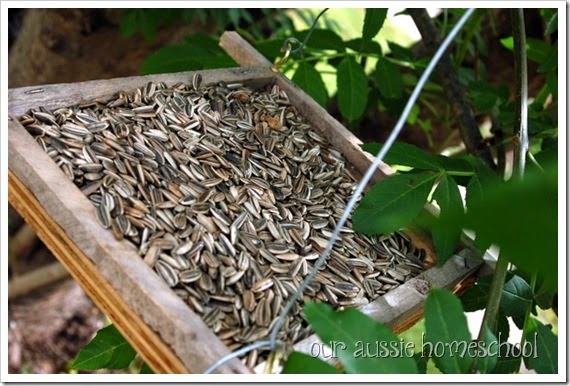 These were a hit!  It didn’t take the birds long to find them and once they did both feeders were emptied within a day.  So we filled them up and they were again empty in a day.  Unfortunately we couldn’t see them feeding very well in order to observe which feeder got more activity.  So much for the experiment!  Our next experiment that involved birdfeeders went much better…post to come!