I’m finding these posts useful but time-consuming.  I hope I’ll get better at them as we go.  This blog is mainly a journal of our activities and these weekly posts are a good way to remember the things we’ve done, though they aren’t all-inclusive!

Math: Still drawing, still drawing, still drawing.  Skeeterbug divided an equilateral triangle into four parts, eight parts, twelve parts using a T-square and triangle.  Part of the lessons had him creating fraction strips and comparing them.  I love this introduction to fractions.  He has to fold the paper strips, cut them and label them.  We are supposed to keep the strips for later lessons but I have him make new ones every time.  Then we look at things like is 1/3 or 1/6 bigger?  How many 1/6ths does it take to make 1/2?  Then he’s to close his eyes and picture it in his head.  Which is bigger: 2/8 or 1/4?  And then we go on to draw a triangle or hexagon and divide them into parts.  We worked on fractions here, but I am loving the way RightStart does it.  (I don’t know why they wait until Level C, other than to keep it with the drawing lessons where it works so well.  Wondering if they will change this with their 2nd edition that aligns to US Common Core Standards.  There has been very little on fractions in previous levels, or maybe I’m just forgetting.)  Both the boys re-started their Dreambox subcriptions this week, Jitterbug doesn’t seem too thrilled with his right now. 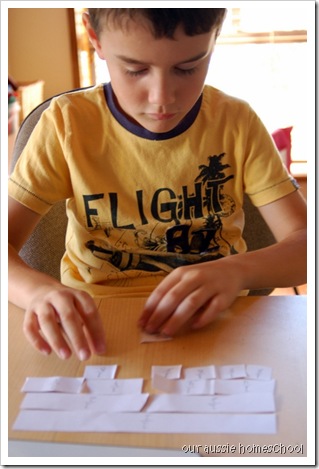 Literature: We finished reading The Lion, the Witch, and the Wardrobe.  We put together our lapbooks from the literature unit by Confessions of a Homeschooler.  Well, most of us did, a certain 5yo was not interested in completing his yet.  I’ll post more about these.  Our next read-aloud will be  Homer Price which I’d hoped to start this week but haven’t gotten to, maybe over the weekend. 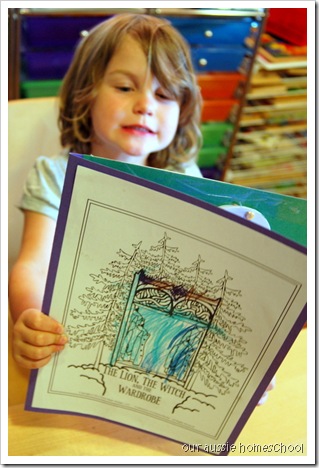 History: We finally got around to reading The Gods & Goddesses of Olympus, a great book with nice illustrations.  We did our Native American sand art project.  We read the first chapter in Story of the World on Rome, we’ll get into Rome more next week. 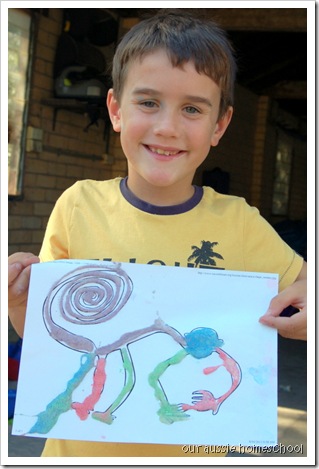 Phonics: Jitterbug completed ETC Book B and made it thirty pages into the next book!  He’s going to fly through it, I realised I needed to go ahead and order the first ETC book, it’s now on it’s way.  He also read a few of the I See Sam readers to me, his first books!  I found some codes for Reading Eggs and managed to extend our subscription by a couple of months for free so he will continue with his lessons there.  I’m planning to pick up AAR Level 1 again next week with him. 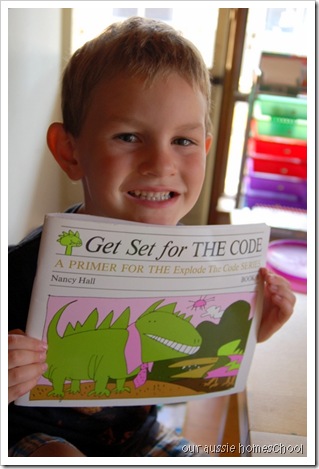 Grammar: Continued with Grammar-land.  We learned about adjective-pronouns and met Dr. Verb. 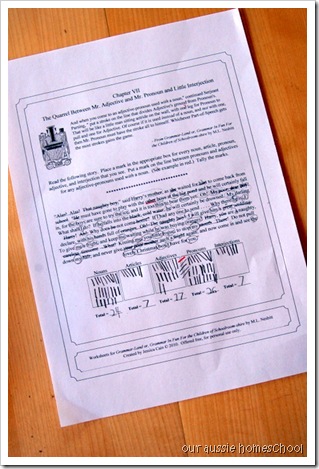 Spelling: Skeeterbug completed Steps 24 and 25.  Three steps to go in this level, we’ll likely have a break between levels since I don’t have the next one yet!  I ordered the last one from Adnil Press here in Australia but it doesn’t look like they carry higher than level 3, so I’ve got to order it from overseas. 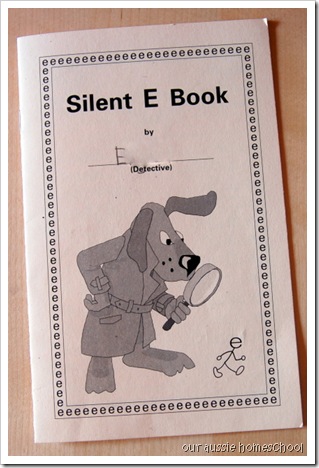 Copywork: We’ve been doing these Aesop’s Fables copywork/colouring books from All That’s Good Publishing.  We do these a couple of times a week.  The younger two just do the colouring pages while Skeeterbug does the copywork.  I’m hoping later this year to move Jitterbug to doing some of the copywork.  They aren’t too interested in the colouring but love the stories.

Calendar Notebooks:  I’ll do a separate post on this to show what we are using this year.  I’m surprised at how happily the kids do these, it’s a nice way to start our day. 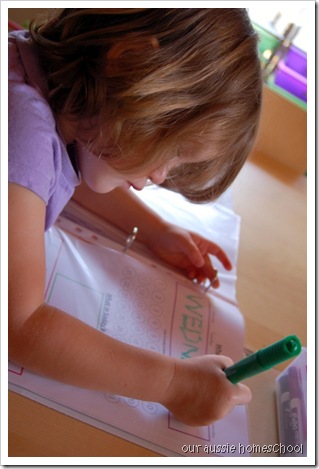 Science: We worked on cells this week, colouring different types of cells and examining an egg.  We watched a couple of Magic School Bus episodes on the body.  I discovered kidshealth.org has short videos on different parts of the human body so we watched a couple of those on body parts we’ve already looked at.  Next week is the reproductive system.  I had grand plans of getting some Zoo 1 done but it didn’t happen. 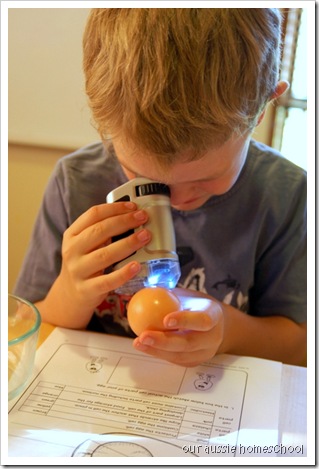 Devotions: Frogs, oysters, sea turtles.  At lunch we also usually read a poetry book.  We finished The Llama Who Had No Pajama a couple of weeks ago and hadn’t picked up a new one.  This week I pulled Where the Sidewalk Ends by Shel Silverstein off my shelf and it’s perfect.  Very funny and most of the poems have illustrations.  We’re also reading Curious George Learns the Alphabet to reinforce letters.

Writing: Skeeterbug completed both Weeks 34 and 35.  The first had excerpts from Bunnicula, I ordered the book because it was so funny to read a book from the dog’s perspective, Skeeterbug was laughing the whole time.  I remember reading it as a child but have a weird impression of a vampire bunny in my mind.  It will be interesting to see what it is like compared to my impression of it.  Week 35 had the longest dictation ever, I counted 61 words!  Week 36 is the last week and is an evaluation week.  We will finish this level next week and take a short break before the next level.

Handwriting: The younger two have been full-on with their handwriting this week.  Ladybug works in her “green book” and then uses the wooden pieces to form her letters.  She asked to use the slate this week and impressed me with how well she can do it.  Jitterbug happily continued with his Frog Jump Capitals.  He struggled a bit with the curves on letters “B” and “R”, especially in the app which was frustrating for him.  Ladybug wanted a go at the app and did well with some very straight letters, “T” and “I”.  They both really want to do their handwriting books everyday and Jitterbug is finally, finally consistently writing his name without reversing any letters (and no prompting!).  Hallelujah! 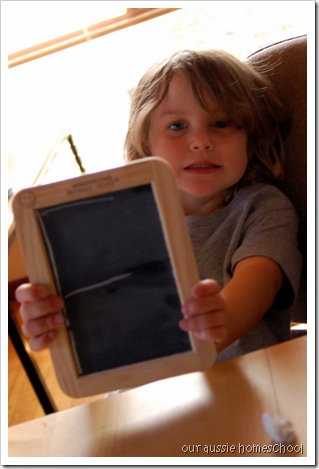 Bible: I keep forgetting to do our Bible curriculum during the week.  It gets neglected in favour of the 3 R’s.  I admit to dragging my feet a bit because I am not in love with part of what we are using- Bible Study Guide for All Ages.  I must pull it out next week.  I love Grapevine but haven’t been pulling it out either, because I know the kids want to do the other one.  To make up for the neglect we watched the What’s in the Bible DVD 2 this week.  The episodes are half an hour long and easy to work in at odd times.  I find the format a bit strange, a lot of switching around, but they are full of information and humorous.  I’m sure we will watch and re-watch these DVDs many times.  I’ve got all the OT videos (1-9), there are now two NT videos, the latest was just released this week.

Art:  We had our weekly art lesson, this week we made an Owl Collage.  All that gluing was a bit painful but I think we all survived.  We even had the house cleaned up enough that we got some schoolwork done that morning! 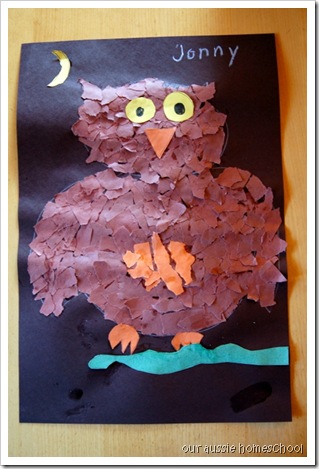 I think that’s all the big things except…the boys had their first soccer practice.  It’s that time of year.  😉