Here’s a quick rundown of logic workbooks we are using this year.  (We also play logic games, but here I’m posting just about workbooks.)  Jitterbug (Prep) has started the first Lollipop Logic book this year.  There are three books for K-2.

Jitterbug is still learning to write all his letters and numbers, so sometimes we use stamps so that he doesn’t have to struggle along.  This is the first lesson where you order the number of pictures in the right sequence.  We got out our wooden blocks to help visualise. 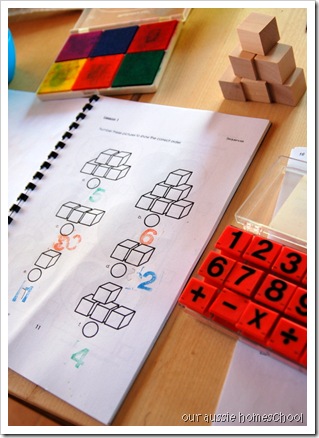 What I like about Lollipop Logic is that there is a mix of problems in the book.  I’m planning to have him work through each book, but this isn’t something we do daily.  We get it out maybe once a week or so and do several pages.  I’m pleased with how well he is doing with it, he is seeing connections in some of the problems that I wasn’t sure he’d be able to see. I started Skeeterbug on Lollipop Logic last year, but it felt so much like busywork that we dropped it.  I think it was probably just wasn’t challenging enough (not the right level), so this year I got Logic Safari for him to try. (The link says this is currently unavailable, but I purchased it from Book Depository not long ago.)

I got the first book which is for Grades 2-3.  A later book might be more suitable but we’ll start here since he hasn’t done grid-type problems before.  We’ve just started this, the whole book is grid problems.  Easy, but he has to pay careful attention to the clues to make sure he catches everything. 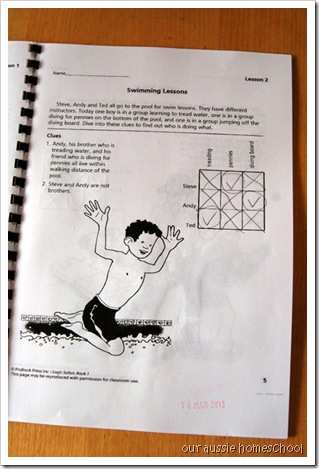 I’ve also just ordered Logic Countdown to give him some variety, it contains problems of different sorts.  This books is for Grades 3-4.

I’ve also got this Critical Thinking Activities book that Skeeterbug has used off and on over the last year.  This is for grades K-3, it’s a nice thick one.  I’ll continue to pull this out for him from time to time for a change of pace.  I need to make Jitterbug a copy, he is ready for some of the activities in this book.

The best part is that all of the workbooks above are reproducible so I can make copies and use them for my younger kids.  You can see in the pictures above that I have bound the photocopies into books. I’ve also got Logic Links Level A.  This is a fun book, it’s really a game more than a workbook.  According to Amazon it’s aimed at 6-8 year-olds.  It comes with little circles that you pop out of cardstock and use to solve the problems.  You have to determine from the clues what order the dots should be in.  I need to get these out again, it’s been so long that Skeeterbug will have forgotten ever using them! 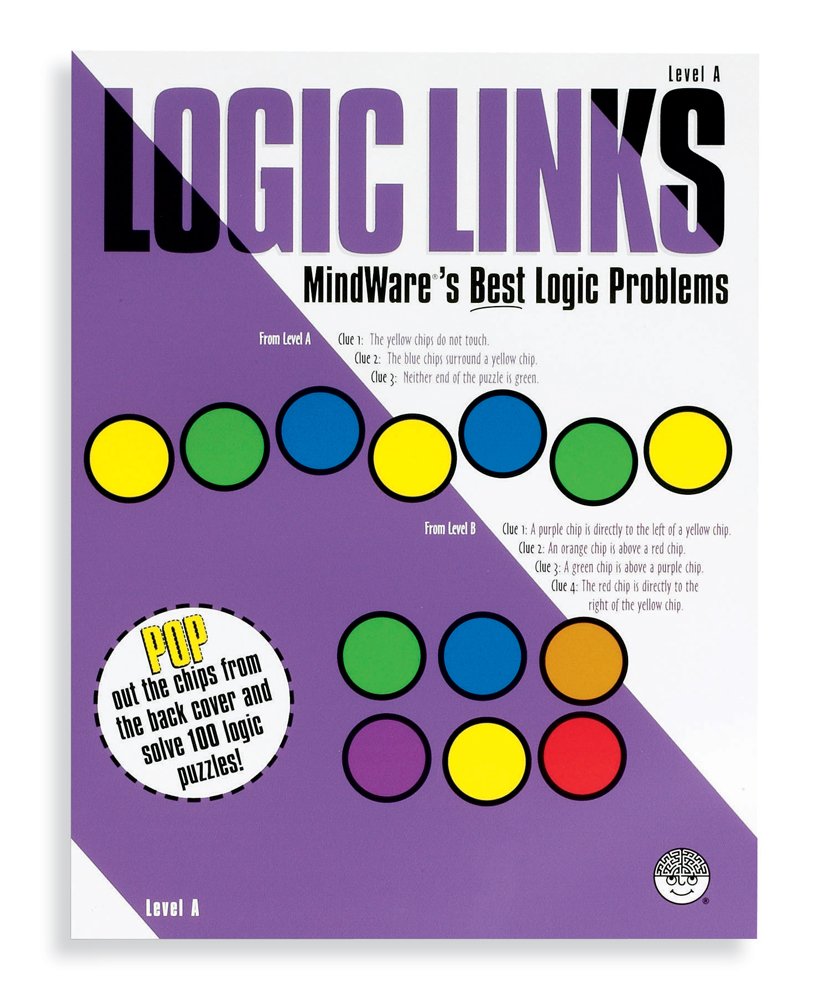 We don’t do logic everyday.  For Jitterbug I pull it out at least once a week, but sometimes he asks to do it more often.  I don’t want to overwhelm him with schoolwork when it’s only his Prep year, but he thinks it is fun.  For Skeeterbug (Grade 3) I pull it out at least twice a week.  The grade designations on all the above books really aren’t important but give a good idea of where to start if you are looking for something for your child. Linking this back to my Curriculum 2013 tab.

« Human Body: The Brain
This Week: the one before Easter »