Skeeterbug has finished this Time, Money, & Fractions book that he originally started over a year ago.  This is a simple workbook, inexpensive, widely available in stores here.  I think I got it at Aldi’s during one of those weeks where they have educational items.  I originally got it for the section on money so that he could have some extra practice with Australian coins.   He already knew how to tell time so we didn’t worry about that section.  After he finished the money section we put it aside, but this year I noticed it sitting on my shelf and decided to have him do the fractions section as well.  It’s a very simple introduction to fractions, but we haven’t done much work with them yet in RightStart so I thought it useful.  When I took this picture he was frowning and then right before I snapped it he put a silly smile on his face.  🙂 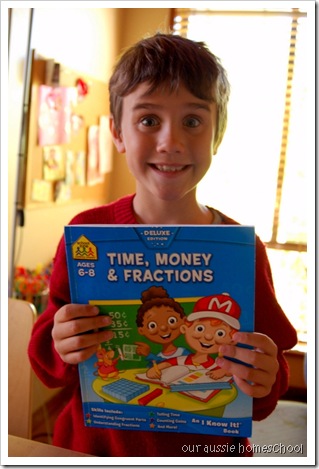 Depending on the child’s math skills this workbook would be good for Grades 1 or 2 (and yes, Skeeterbug is Grade 3 this year!).  I don’t know that I will use it with my other kids though, I’ve now got Math Mammoth which has a section on Aussie currency for each grade so I’ll probably use that in the future.