So it is summer here and we are using the month of January to finish up astronomy and do as much as we can in history.  In astronomy we’ve finished up through lesson ten (Saturn) out of fourteen lessons.  (Apologia is designed to take two weeks per lesson, though you can do it faster if you prefer.  We obviously didn’t get to it often enough during the year or we wouldn’t be playing catch-up right now!)

The project to go with the Saturn lesson is to make film canister rockets.  We did this back in December with our homeschool group.  We took it all to a park and all the kids made their own rockets.  I didn’t get any pictures since I was so busy filling up the canisters for all the kids, so I asked mine if they wanted to do it again, this time at home.  I didn’t think I’d get any arguments.  🙂

I purchased film canisters on ebay.  I asked at a local film processor and they said they maybe get ten canisters a week.  For this project you need the Fuji-type canisters (generally white) where the lid fits snugly inside the canister instead of the kind that overlaps the side (generally black with a grey lid or white with a black lid).  I didn’t want to visit every film processor in town to round up enough for our project, there was no guarantee of finding the right type or enough of them.  So, ebay it was!

We drew some pictures and then taped them onto the film canisters, lid facing down.  Jitterbug drew a house with lightning and clouds around it.  He asked how to write ‘Kaboom’ and wrote it over to the side, can you see it?  That’s where the lightning hit. 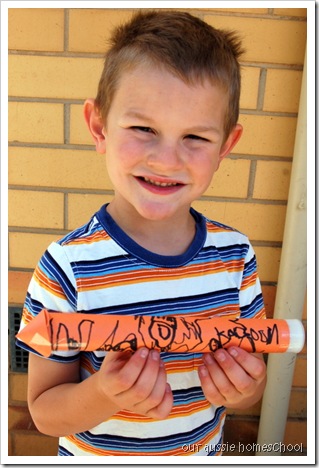 Skeeterbug drew a shark among other things. 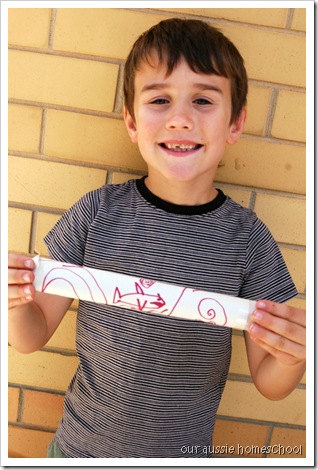 When I asked Ladybug what she was drawing she pondered for a moment before telling me it was a swimming pool.  Apparently my kids weren’t going for authentic-looking rockets! 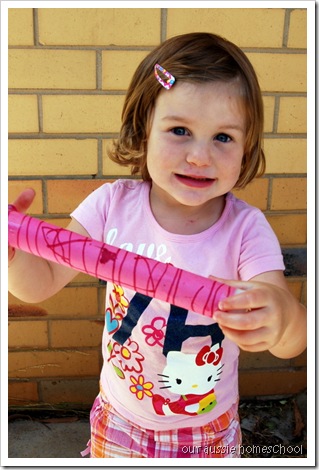 We used Alka-seltzer tablets and water.  The tablets are quite large so we broke them into pieces.  They break very easily and crumble a bit so sometimes we used two or three small pieces.  We learned that the less water you put in it, the higher the rocket would go.  It was slightly windy so our rockets kept falling over in the breeze while we waited for them to explode (in the picture below it is falling over as I snapped the pic.)  We had some explode while laying on their side, it was fun to see the rocket go in one direction and the lid in another.  Ladybug’s first rocket went as high as the roof.  She kept saying “I win!” because hers went the highest of the first round. 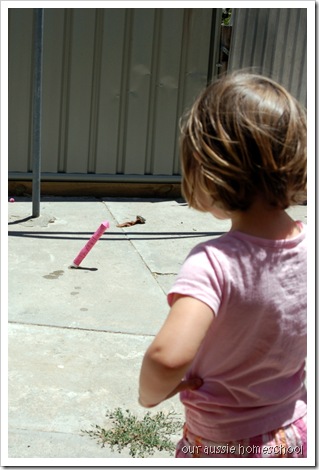 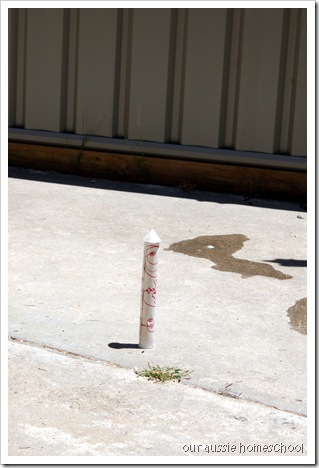 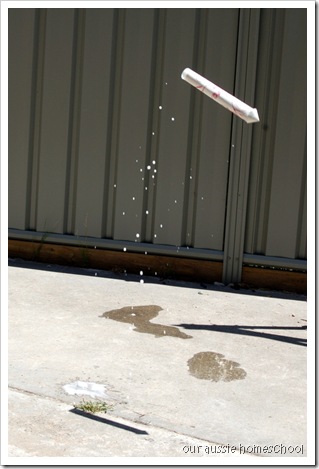 Neither did Jitterbug’s.  After a couple of tries with the rockets they made we changed to plain film canisters.  Without the weight of the construction paper they went much higher. 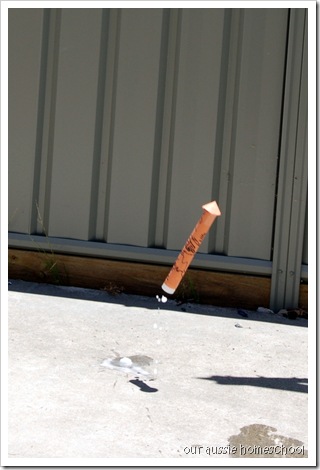 Here’s Jitterbug placing his canister and running back to watch.  You can just see it on the ground directly behind him.  (It’s white, hard to see.)  The plain canisters were much more satisfying for the kids since they went higher.  As high as the roof sometimes, and we lost a couple over the fence. 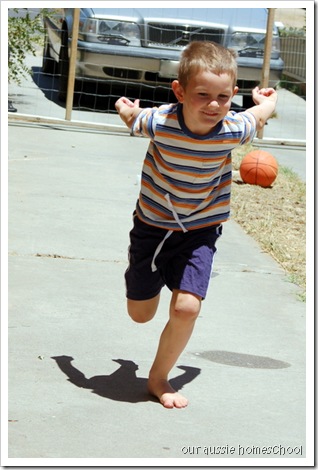 When we did this with our friends at the park we also tried baking soda and vinegar.  I read online beforehand to wrap the baking soda in toilet paper squares to slow the interaction.  That allowed enough time for us to get the lid on before it exploded.  We varied the amount of baking soda to vinegar, and sometimes wrapped it in one square vs two.  The results weren’t great.  They often never exploded, or took a very long time to explode.  When we varied the amounts then often they exploded too quickly.  It was tough to get the right ratio, especially when working with so many kids, I couldn’t remember who had tried what.

When we did this again at home the kids didn’t want to do the baking soda version again.  Be aware if you do this with the lid facing down, some of the liquid will leak out.  We did it this way to be able to tape the rockets onto the canisters.  As long as the lid is on tight it still works.  If you are just doing plain canisters you can turn them either way.

I’m sure we will do this again sometime, it’s a fun activity.

« Solar Eclipse
Expansion of the Universe »