Our geography studies have been overlapping our history studies.  We just finished up looking at Egypt, though we will have more to learn while we continue to study ancient history. We played a couple of Egyptian games from here (scroll down to Egyptians, there are lots of great resources on this site).  I found these on someone’s blog but can’t find the link.  The first one is called Seega.  You start with the x’s lined up on one side and the o’s lined up on the other.  You can move your pieces in any direction but you can’t jump another piece.  The first one to have their pieces lined up (in any other location but the starting line) wins. 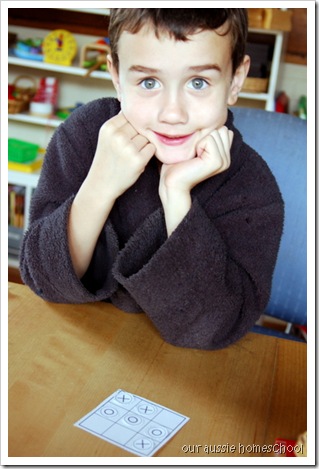 The next one was Mehen.  The idea is to move your pieces to the centre and back again before your opponent’s lion can eat them. 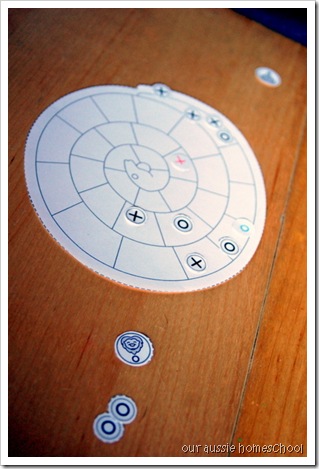 We built a pyramid out of sugar cubes.  We used two boxes of 100 each.  Since they were over four dollars a box and I thought $8 was enough to spend on this project we had to come up with a way of stretching them.  We built our bottom layer of an 8×8 square of cubes.  The next layer of 7×7 we just outlined.  Then we filled in the empty space with cheap white flour (the kind I keep on hand for making playdough).  That helped to keep up the outlined layer.  The next layer was 6×6 and so on.  We glued down each layer using white craft glue. 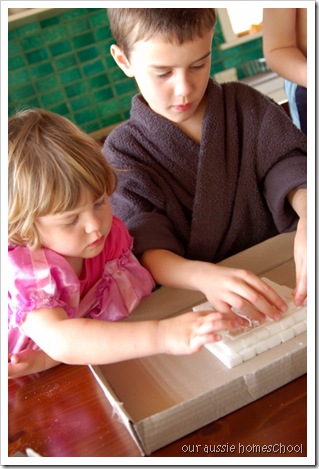 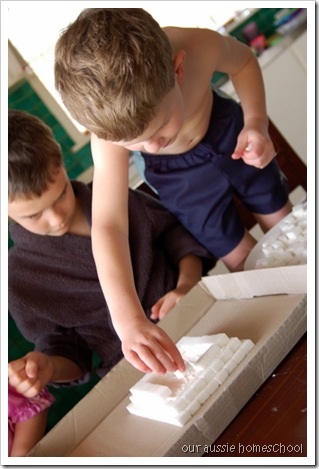 We had to pack the flour in pretty tightly for it to work.  The tip I read was to use white sugar but I didn’t have any.  The white flour was a good substitute but harder to pack in. 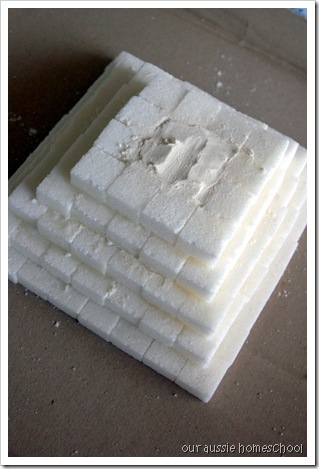 We had enough sugar cubes left over to make a couple of baby pyramids.  We let this dry overnight and the next day carefully added some sand around the pyramids. 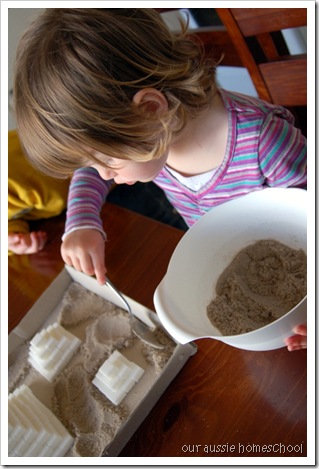 We added a piece of felt for our Nile River and the pieces from our Ancient Egypt Toob.  And suddenly we had an Ancient Egypt sensory bin! 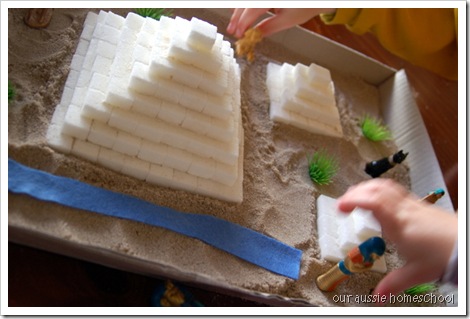 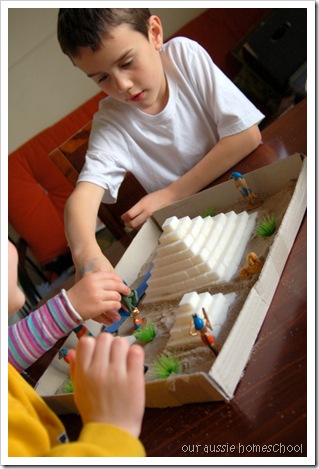 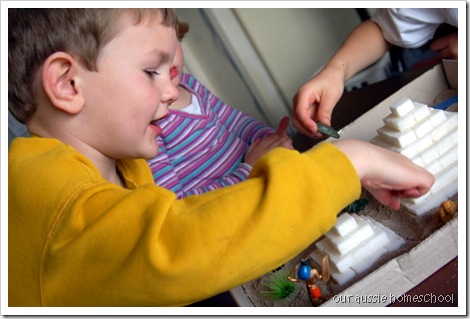 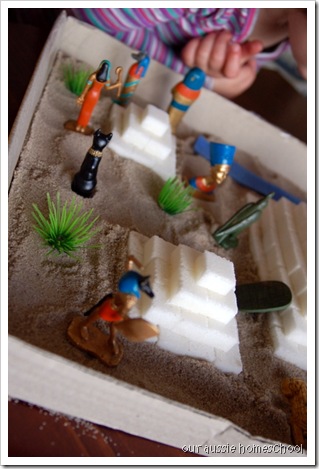 I grabbed our copy of Bill and Pete Go Down the Nile.  The first time we read it I think I only read it to Skeeterbug.  The other two were fascinated and hung on every word. 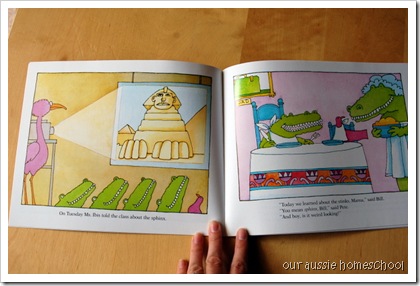 The sensory bin has been revisited several times.  Ladybug especially enjoys walking the figures up and down the pyramid.  I love to listen to the dialogue she makes up for them while she is playing.  (She’s wearing the same shirt, but this was taken on a different day.) 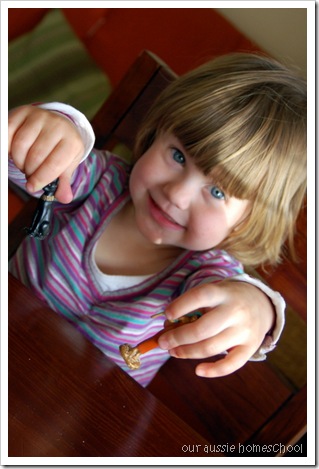 That same afternoon we made sculptures from marshmallows and toothpicks.  I would have loved to use grapes for a healthier version but it is not exactly grape season here.  The idea was that we were going to make pyramids like they did here but on a smaller scale.  Once we got started I realised my kids are a bit young for something that ambitious!  We still had fun experimenting.  See the mini-pyramids on the table? 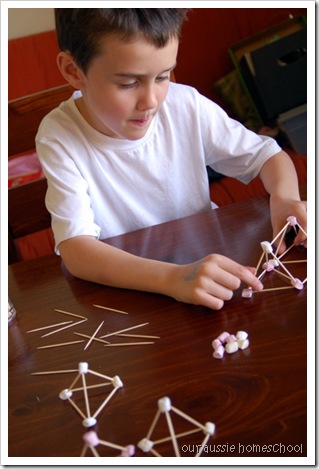 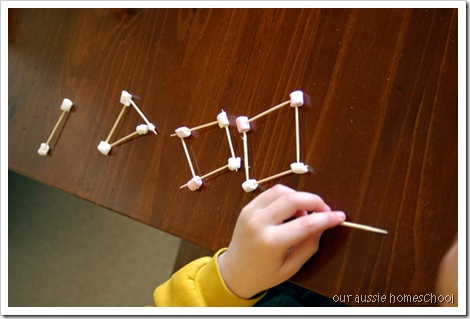 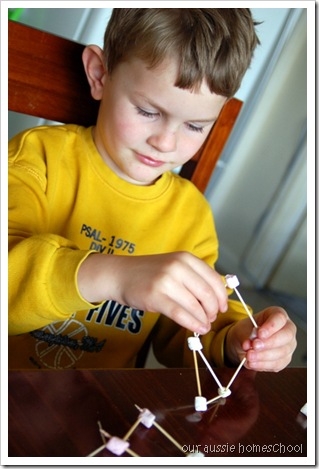 Ladybug busied herself with eating marshmallows. 😉 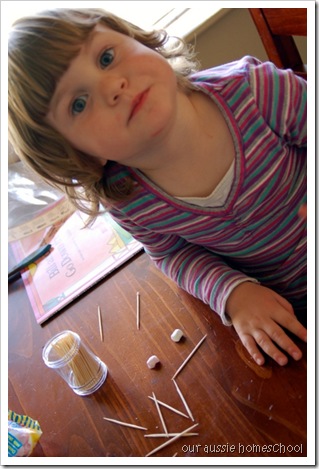 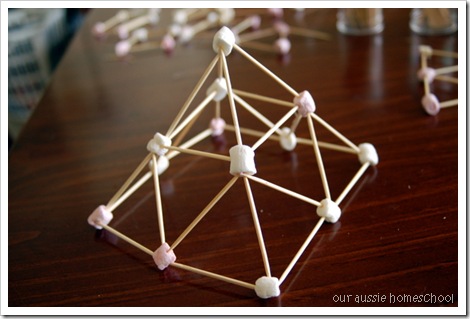 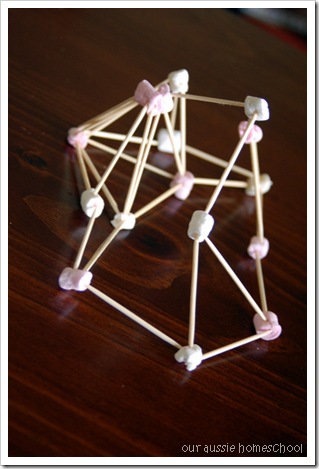 My geometric shape of some sort: 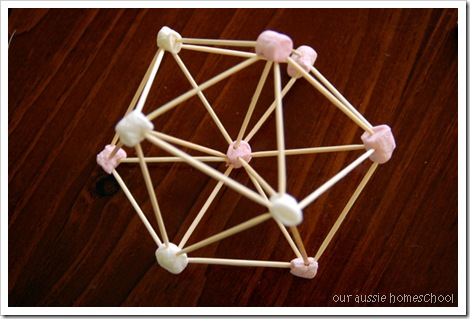 I have more but I’m having trouble uploading the post so I’ll split it into two posts.