Ages ago we took our regularly scheduled week off of school.  We’ve been doing six weeks on, one week off and it has been working well this year.  So we took our week off, and towards the end of the week Skeeterbug got sick.  It extended into the next week.  Then the other kids got sick, and I got sick and that all extended into the next week.  And the next week.  We recovered, and then we got slammed again.  And we are still in the midst of it. So our schooling has been all about doing the basics.  Math, writing, spelling, reading.  We managed to row We’re Going on a Bear Hunt (which I’ll post about at some point).  And we’ve been doing some Olympics things here and there, and watching quite a bit.  Science and history have been reduced to some sporadic read-alouds and much watching of Magic School Bus.  Blogging has taken a backseat.

But winter can’t last forever, and though the weather hasn’t changed much the trees must know something we don’t…the wattles are blooming and other trees are also, so spring must be on the way.  It’s just over three years now since we moved to Australia.  The wattles in bloom are one of my earliest memories of being here.  Aren’t they pretty? 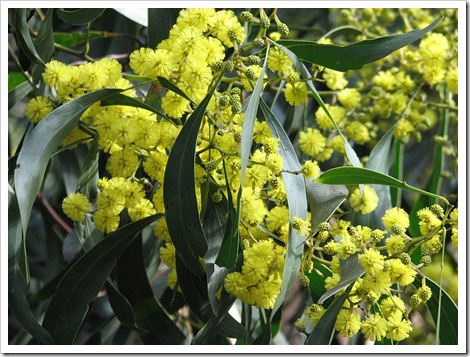 It’s time for our next break but we aren’t taking it because we’ve missed so many days the last couple of months. Hopefully we will get back to some normalcy soon.