Some time ago I posted about Skeeterbug’s skip counting memorisation.   We’ve been using these free skip counting drill sheets from Lilliput Station available on Currclick.  While we were progressing nicely it was just taking too long.  So I decided to bribe Skeeterbug into memorising these a little faster.  I told him that as soon as he could recite all of them I would buy him a big chocolate bar.  He replied that he didn’t want a chocolate bar.  What did he want?  A $2 bag of lollies from the milk bar at the end of the street.  (That will send my SIL into convulsive memories!)  We’ve visited the milk bar (they’re like small family-run convenience stores) a few times but the kids usually are only allowed the smaller 50c bags of lollies.  That $2 bag was like gold to him.

Many months ago I printed out these skip counting charts from Homeschool Creations.  I printed them four to a page and bound them into a little book.  I sent him off with the little book and he had it done within an hour.  An hour!  I think he surprised himself.  Off to the milk bar we went, and I had a very happy seven-year-old. Of course retention was going to be an issue.  I told him we were going to practice our skip counting everyday.  “I know.”  And that he wouldn’t get a bag of lollies everyday!  “I know!” he said, with a smile.  I could tell he was proud of himself.  The next day I had him fill out this drill sheet.  After he finished we looked at the various patterns to see what we could find. 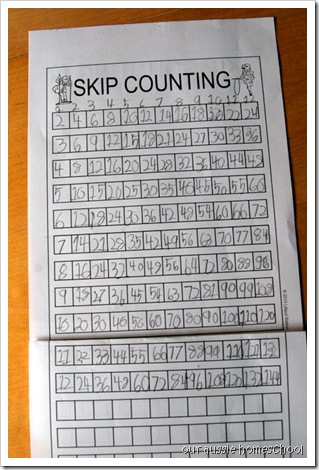 Every day since then we have practiced these.  He doesn’t have them down perfectly and there are a few he struggles with.  But it is so much better to now be reviewing them all daily instead of practicing one until we both want to pull our hair out!  Once he’s got these down a little better we will start on multiplication tables.  He won’t have to recite his tables in front of a classroom (apparently that’s like a rite of passage in this country!), but I am planning to have a “Look what I memorised!” party where he will recite some things for family.  (Shhh!  I haven’t told him yet!)