Since we are studying astronomy this year we had to see the transit of Venus.  Our local science museum had their telescopes out so we had a look.  Apparently the transit of Venus back in 1769 led to the discovery of Australia.  Captain Cook travelled to Tahiti to document the event, and later in that voyage came across this little land we’re on. 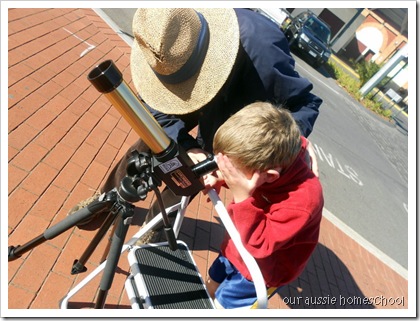 Ladybug was a bit shy about it, but later she had a look through a different telescope.  While awkwardly balanced on my hip instead of by herself on a stool.  I don’t think she’d looked through a telescope before, but she did see the “big orange ball” when she looked through the lens. 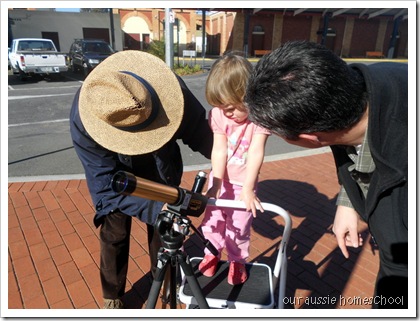 I purchased a pair of eclipse glasses from the science museum on an earlier visit.  I’d looked at ordering these online but just didn’t know which to trust, I didn’t want to risk getting some that would be unsafe.  When I asked the guy at the museum about them he spouted off all the safety specs with these specific glasses and took me outside to try them.  When you look through them the sky looks black and the sun appears orange.  (With a black dot in front of it on this day.) 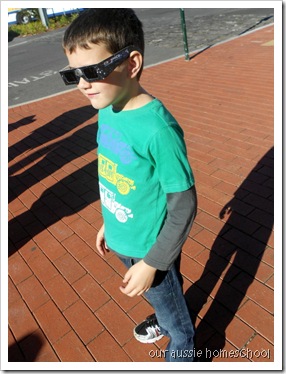 There weren’t many kids there (being the middle of the day during the middle of the week).  So we got a personal demonstration of planet sizes and distances.  Here’s Jitterbug holding the “sun” while the others spread out to show where Venus and Earth would be.  We also had our shadows measured (you can see on the ground behind Jitterbug someone else’s shadow outline from earlier that morning). 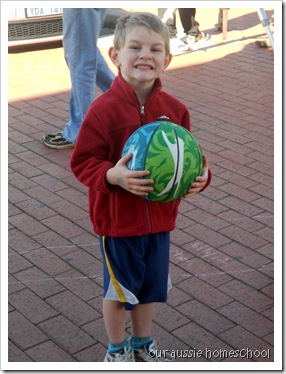 They had a telescope reflecting onto paper.  Hard to see in this picture but you could see several sunspots as well. 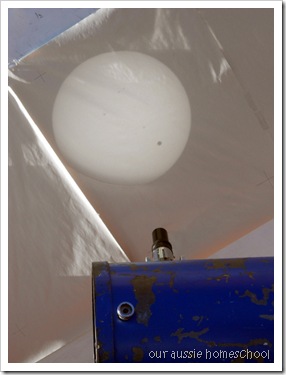 We went to the nearby shops and came back a bit more than an hour later to see how much Venus had moved during that time.  This was probably about 45 minutes before the end of it all and just before it became cloudy here.  Glad we didn’t wait until the end, once the sun went behind the clouds it stayed there. 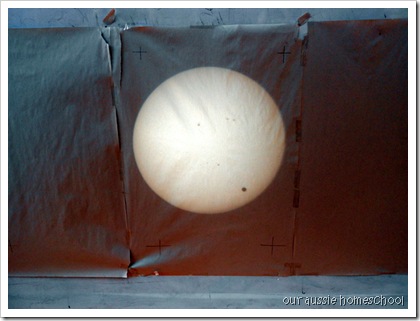 We had another look at our shadows to see how much they’d moved during that time. 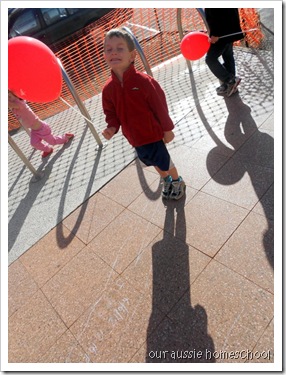 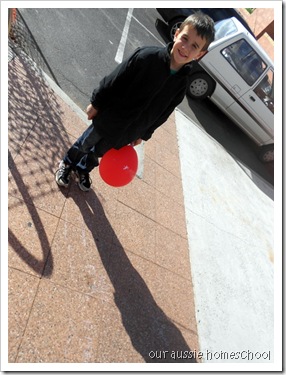 Ultimately it looked like just a black dot on the sun, but it’s so neat to think that little black dot is a planet about the same size as us.   And that people have been tracking its movement for hundreds of years!

« Kid of the Day
Are you happy you were homeschooled? »