We recently visited The Bible Museum in St. Arnaud, Victoria with our local homeschooling group.  Apparently it is the only Bible museum in Australia, and the only one in the world run by women. 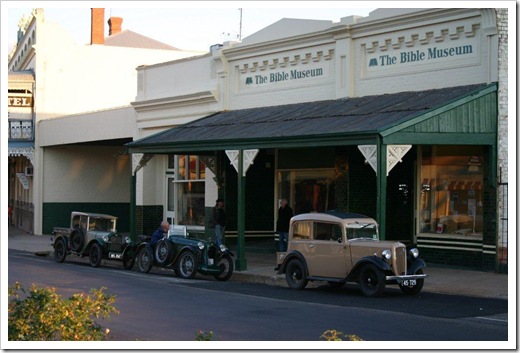 Looks like a room you wouldn’t want to take your toddlers into, right? 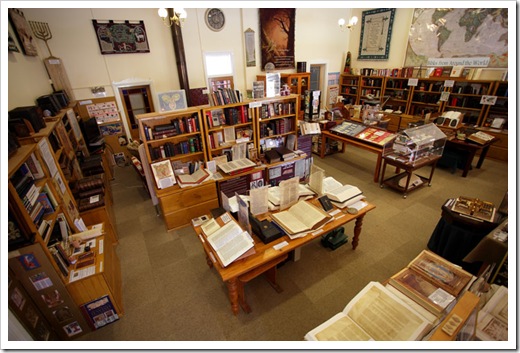 What’s missing from the picture above is the train table they had placed in nearly the center of the room.  The littlest kids all flocked to that, so it wasn’t too bad.  Besides Bibles there were various temple and tabernacle models, wax seals, coins, Ancient Egyptian artefacts.  All kinds of things.  The ladies didn’t seem to bothered by all the kids.  They even had kid-friendly morning tea.  There was no entrance fee, just a donation box. 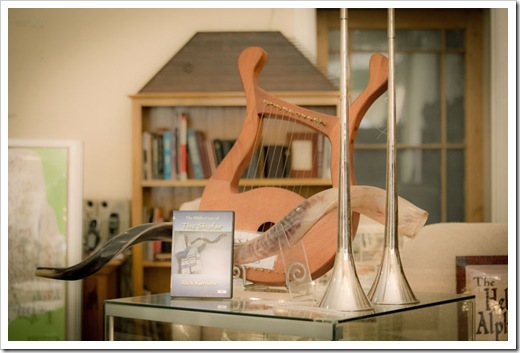 But the best part was the butterflies.  These women raise Monarch butterflies.  Here in Australia they are called Wanderers.  They gave us a mini-lecture on metamorphosis.  We got to watch a caterpillar shed it’s exoskeleton and curl up into the shape of a pupa.  It only took a few minutes.  They also sent us all home with a pupa.  It was nice and green when they gave it to us.  See the dots of gold? 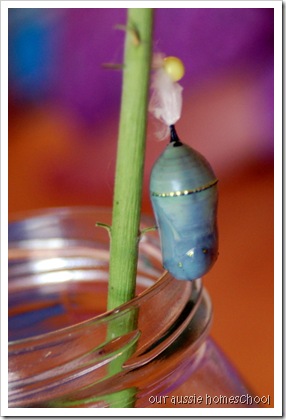 A few days later it darkened. 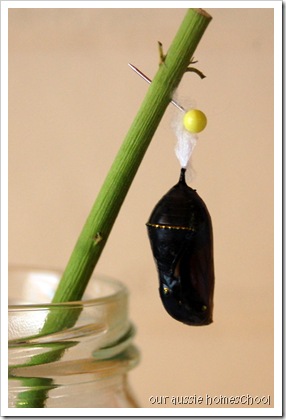 Then it became nearly translucent.  I upped the fill light in this picture (thus the graininess) so that you can see the butterfly inside. 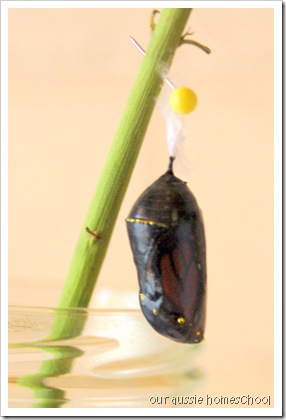 When we came home from soccer training last week we had a butterfly!  We must have just missed it emerging from its pupa, its wings were still dripping.  You can see some of the fluid dripped down the side of the glass jar. 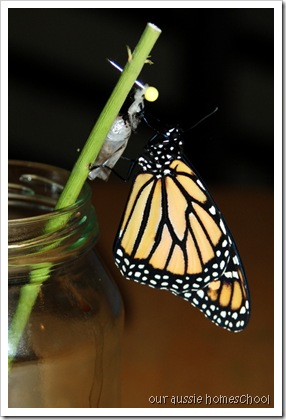 The next day it hadn’t left its perch.  See the dark spot toward the bottom of its wing?  It has one on each side, apparently that means it’s male. 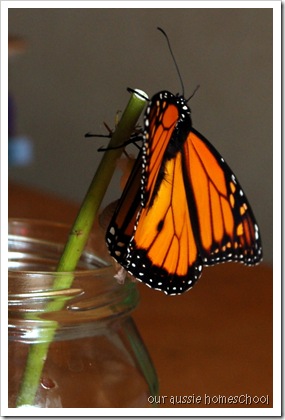 We put an upside-down mesh hamper over the jar.  When he started moving around in there we knew he would have to go soon.  We did put some sugar water in there with him in case he was hungry. 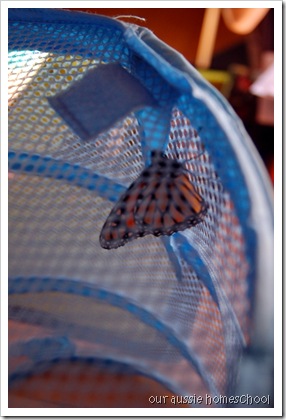 When we let him go he immediately flopped straight to the ground and struggled.  I coaxed him onto my finger and placed him on this plant.  He hung around on the same plant for a few hours.  Then he was gone. 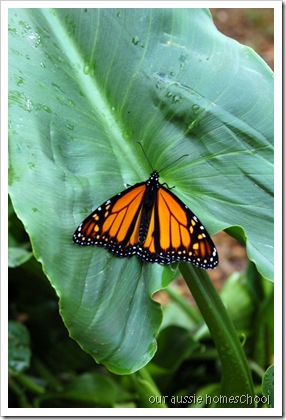 As caterpillars, Monarchs only eat milkweed.  The ladies at the museum gave us some milkweed seeds to plant in the hopes that we will attract some here.  Monarchs can fly pretty far in search of their food, so hopefully it will work!  The seed packet says they are frost-sensitive so I am wary of planting them this time of year, we will probably wait until spring. I was just as excited about this as my kids were!  Next year we will definitely be hunting down caterpillars so we can watch this process again.  If we can’t find any Monarchs, we may end up hatching moths!